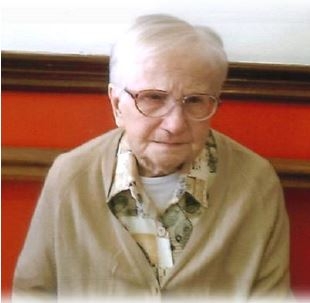 On 9 July 2020, the news of the death of Sr Joan Brosnan reached us in Monasterevin. Joan, a native of Karry joined the Drogheda community in 1941. She was given the name Aloysius at profession and would be known by many in Drogheda as Sr Aloysius.

Her name maybe unknown to many of our younger Sisters across the Congregation. We all owe a great debt of gratitute to Joan. Today, because of Joan we all belong to the Union of Presentation Sisters. Joan was one of the midwives who initiated the conversation that lead to Union, a conversation she named as the Charism of Nano Nagle. Joan Brosnan was a prophetic voice in the birthing of Union.

Joan Brosnan was a woman of vision, a woman of faith and passion with a deep love for Presentation. She was Superior General of the Armagh Congregation in 1972 when she was inspired to host a gathering for the different autonomous Presentation Congregations in Ireland and England on the Charism of our foundress Nano Nagle.

She invited two Jesuits to lead the Seminar – Fr James Walsh and Paul Molinari. In the months prior to the Seminar Joan travelled all over Ireland visiting the different convents inviting Sisters to present papers at the Seminar on the Charism of Nano.

Over 300 Sisters from all corners of Ireland and beyond arrived for the Seminar at Greenhills, Drogheda, Co Louth. During those days while reflecting on Nano and her charism a sense of belonging grew among those present. There was a palpable movement in the group. Fr James Walsh drew the attention of the group to what was happening among them. He asked them if they had noticed the energy that was growing in the group. Although nothing had been organised the felt movement of the Spirit’s presence was tangible. He asked them if ‘you want to continue talking, sharing on the Charism or if you want to take notice of what is happening among yourselves – coming our of your hearts and spirit’. The Sisters decided that they would like to look at what was happening, and thus more meetings were arranged.

They decided to share what was happening among them with the Congregation for Religious in Rome. Shortly afterwards they were called to Rome. Joan and Sr gertrude Connolly were responsible for taking this step. When the Superior Generals arrived in Rome for the formal meeting in the Congregation for Religious, they were undecided about what they would say so they were advised to let the meeting take the form of a dialogue. Sr Lucy Troy chaired the meeting as Gertrude could not travel as she was sick.

Having met Archbishop Meyer in Rome Fr James Walsh advised them to draw up a plan and present it to the Sisters in the different Congregations. A Central Co-ordinating Committee was formed and thus based on Charism the journey of preparing for a possible Union, with its ambiguities and frustrations took place over 4 years. Joan participated with passion and diligence until the 1976 General Chapter gave us the Union of Presentation Sisters we haev today.

Almost 50 years have passed since Joan gave voice to her vision. In giving it a name she allowed the work of the Spirit to take it forward and thus her dream has become our reality, the reality of a continuous journey into an ever deepening of Union, blessing us on this evolving journey.

The Story of Union reminds us that God continues to work with the Congregation. For this prophetic moment on our shared journey we give thanks to God and to Joan and to all those willing to listen to the voice of God’s Spirit.

Many Joan no wenjoy the fulness of life with Christ whom she sherved so well through her life and mission.

May you rest in peace Joan.

THANK YOU – WOMAN OF VISION, OF FAITH, OF PASSION!