Health Education and Training for Adolescents in Quito, Ecuador 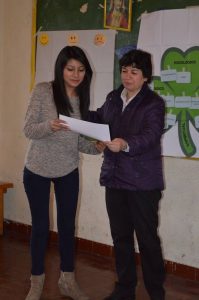 In 2017 Sr Marcela Cruz was asked to become Executive Director of Fundacion Tierra Nueva. This was for five years duration – the work of which is transforming lives in the South of Quito. Marcela writes…

On my second visit to the Centre, I was very impressed by the leadership team and the results they were obtaining. First of all, they have quite a big outreach and as I live quite close by, I sometimes meet the parents on their way in or just coming out. As people here are open about their problems, one mother confided in me and spoke of the importance of the Centre and how her son is being helped. It was obvious that the awareness raising for large numbers of parents that help was sought, and results were plain to be seen in the relationship at home.

After my second visit, I also saw a very interesting result. A young girl had to give a testimony during a meeting and it was obvious she came from a poor home; however she grew in confidence as she began to speak, she overcame her nervousness before such a large audience and proceeded to speak logically and clearly. In a huge government school, people like her are often left behind, hence the importance of the space Marcela and the team are providing in the area.

The drug culture is growing and almost out of control, but the awareness-raising of the various workshops and the emphasis on sexual and reproductive health are all elements which are being worked on. The young people are broadening their horizons and are coming to the awareness of the importance of mutual respect in quite a violent atmosphere around the south of Quito. 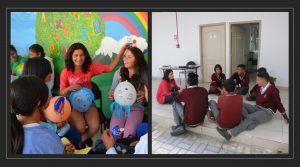 Leadership, self-knowledge and creativity are hallmarks of the project and cannot but improve the lives of most of those taking part. The involvement of the teachers has been a success because, by and large, with huge numbers in classes the young people with problems are left behind. The availability of a Centre with highly qualified professionals is not too common in our midst.

I am particularly interested in the outreach towards doctors, nurses, social workers and hospital staff etc. because as isolated approach to problems in society doesn’t work. It is to the credit of the Centre that they have received people with addictions, depression, suicidal tendencies from another hospital, there is just no other Centre like it around. I have a friend with drug problems, but he is too old to attend the student meetings. Parents of older addicts get them locked up in unprofessional and seedy centers which destroy their personalities and increase their problems afterwards.

The needs of the marginalized are being addresses. A cursory glance in passing sees a constant stream of people of all kinds and those with special needs are taken into account. I also notice the space around the center is being cared for – flowers, plants, seats, meditation areas are all signs of the importance of environment in the healing process of young people. Noise, pollution, high-rise buildings, rush and a constant struggle to make ends meet are all factors militating against youth, so a young pregnant teenager has a place to go and reflect on her life. She is also a future leader who will replicate her knowledge and help others in the future.

An overall result I see is the time given to allow young people to tell their life stories. With so much digital communication, the real person is excluded but the modern methodological process used focuses on what is most needed nowadays: the importance of being listened to and being able to listen deeply to the other person.

Participation and process are two vital elements I notice in this Centre. There are no threats, blaming or stigmatization of the young people so the challenge is to continue to support this Centre financially and replicate it or, at least, help more young people to educate themselves professionally.

The challenges are enormous because of the scale of problems due to a culture which sees the rise of drugs of all kinds. But the protection of the child and adolescent in an area of the south of our city is a light shining brightly and long may it continue to do so.