Baby Wrapped in Swaddling Clothes, Lying in a Manger 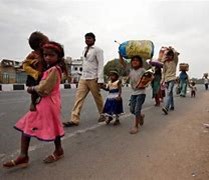 The images of thousands of migrant labourers with families returning to their native villages during the lockdown are still fresh in our memories. They walked thousands of kilometres in the scorching Summer heat to reach their destination. There were pregnant women too among these, some of them in their ninth month of pregnancy. It was just a piece of news to our ears at that time when we heard that some of these women gave birth on the road-side and some in moving vehicles.

We can imagine a similar situation in Bethlehem. All those who migrated from Bethlehem are now coming back to their native town because of the Royal command to register themselves in their own home town. Joseph, a migrant worker, a carpenter by profession, now settled in Nazareth, a small village in Galilee had to make that long trip. He could not leave his wife behind though she was in her ninth month of pregnancy. So he took Mary along with him and they made that gruelling journey and reached Bethlehem. 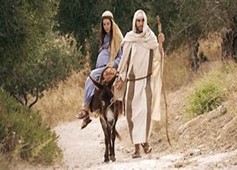 According to the Gospel of Luke, we are told: They were in Bethlehem when the time came for her to have her child, and she gave birth to a son, her first born. She wrapped him in swaddling clothes and laid him in a manger…(Lk 2: 6-7). These two verses about Jesus’ birth narrative do not give all the details about his birth. Like any other pregnant woman, Mary underwent the pangs of childbirth without the consoling and comforting presence of other women, especially her own mother or any other close relative or even a midwife. Without getting panicked she gave birth to her son even in that unusual and difficult situation. She did not even have the privacy of a room to give birth since there was no room for them in the Inn (Lk 2:7).

Even in this unfavourable circumstance of his birth, Mary made sure that the infant had the most necessary thing needed at the time of his birth. Luke tells us that Mary wrapped him in swaddling clothes. She would have carried these along with her before setting out for the long and arduous journey. Swaddling clothes are cloths and bands used in the practice of swaddling. It means wrapping an infant tightly in cloth. This helps the baby transition from the womb, which is a very snug place to the outside world. The custom of swaddling a child helps them feel comfortable, protects them from the cold weather, and prevents their flailing arms from waking them up. Swaddling an infant is a very common practice. Then why did Luke include this small detail in the birth narrative of Jesus? One of the reasons behind the inclusion of this seems to be to present the infant as the expected Messiah. This was the message given to Mary by the angel Gabriel at the time of his annunciation. This small detail seems to link it to the birth of King Solomon, In swaddling clothes and with constant care I was nurtured (Wisdom 7:4). It is one of the numerous messianic images that are being fulfilled in the birth of Jesus. 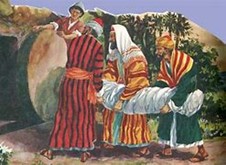 and foreshadowing of Jesus’ death. St Gregory Nazianzen in the 4th century made the connection in one of his homilies, saying, He was wrapped in swaddling clothes – but He took off the swathing bands of the grave by His rising again. This is often visually depicted in early Christian iconography in which Jesus is swaddled in such a way that he looks like a mummy, and is even shown in front of the darkness of a cave. Furthermore, it was a Jewish custom to bind the lambs that were destined to be sacrificed in the Temple, swaddling their legs. Again, this action further solidifies Jesus being known as the ‘Lamb of God’, who was sacrificed for our salvation.

Further, the angel’s message to the shepherds in Bethlehem seems to be in the same line: …Let this be a sign to you: you will find a baby wrapped in swaddling clothes lying in a manger (Lk 2:12). Though the infant born is the Messiah, the annointed one, yet he is presented as any other infant needing the comfort of swaddling clothes. This is the mystery of incarnation. God is in complete solidarity with humanity, becoming one among us. 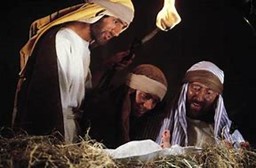 Like the female migrant workers who gave birth on the road-side or in trains and laid their newborn not in the comfort of a nice cradle or a soft bed, but on grass or the rough surfaces of vehicle floors, Jesus is lying in a manger, laid in the animals’ food trough. This is the sign given to the shepherds. God’s own Son made His appearance on earth in the lowliest of circumstances. His humble birth conveys an amazing message to creation: the transcendent God condescended to come to us. Instead of coming to earth as a pampered, privileged ruler, Jesus was born in meekness, as one of us. He is approachable, accessible and available even to the smelly shepherds of Bethlehem.