Presentation Sisters first arrived at St John’s in Newfoundland from Galway, Ireland in 1833 and set up a school.  The story of these founding Sisters, and the unfolding of the mission in Canada and beyond can be found by visiting the website here.

In August 2019 Presentation Sisters celebrated their 160th  Anniversary of their arrival in St Mary’s Newfoundland.   Please see photographs of the wonderful celebration below. 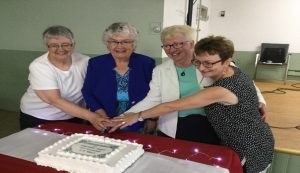 The joyous day began with a re-enactment of the arrival of the Sisters on 11 August 1859, followed by an outdoor Eucharistic Liturgy at Battery Park on The Point, the exact spot where the Sisters came ashore 160 years ago.Deep gratitude to Sister Patricia Whittle for making the three habits, and to Father Steve Courtney, and Sisters Sandy Butler, Mabel Whelan and Bernadette Doherty for the touching and joyful re-enactmentAfter Mass, two storyboards were unveiled at Battery Park. Pictured on the first Storyboard are some of the first Sisters and the five remaining Sisters from St. Mary’s …  Sisters Mabel Whelan, Monica Fagan, Sandy Butler Betty Rae Lee, and Elizabeth Whelan.After the ceremony at Battery Park, all moved to the Parish Hall for a delicious dinner, the touching moment of the lighting of the Memorial Candle honoring our deceased Sisters from the area, and the cutting of the Anniversary Cake. The cake was sent to our Sisters at the Motherhouse so they could join in the festivities in a small way.
Sheila Lee, Mayor of Riverhead, emceed the event and addresses were given by David Fagan, President, St. Mary’s Bay South Historical Society, William (Billy) Fagan on the history of the Presentation Sisters in St. Mary’s from 1859 -1987 and Betty Rae who paid tribute to her aunt, Sister Elizabeth Bonia, and who also thanked all those involved for a magnificent celebration. Entertainment led by Russell Molloy rounded off this segment of the celebrations.

The next phase of the celebration took us to the former St. Anne’s Convent, now the Claddagh Inn, where the owners, Carol and Patrick Monsigneur, greeted us warmly. They are both so interested in celebrating our Presentation presence in St. Mary’s Bay South. Again, delicious food was served after which some of us visited the cemetery, the final resting place of Sisters Joseph Marnell, Francis Burke, Magdalen Hennessey and Agnes Hewitt. So many were asking about all who had lived and ministered in St. Mary’s over the years.